So, um, I wrote about 80 percent of this about a month ago. In my mind, I’d finished and published it. My mind was wrong, per usual. So, after much delay, here’s a wrap-up of our fun time at the Coral Skies Music Fest. If I hadn’t discovered my favorite new band, I may have considered never hitting publish. But they’re too good not to share.

I thought I’d take you back into the wayback machine to tell you about  the great time we had recently at the Coral Skies Music Festival. And since attending a full day of music is as rare for me lately as, um, blogging, well then that makes it blog-worthy!

After dropping E off at my grandparents and picking up our friend Joel, we headed over to Tampa for a day of great music, (extremely overpriced) craft beers and (mediocre) food trucks. At least one out of three ain’t bad. The weather was perfection, though, and any chance we get to take a full day off from parenting deserves celebrating. (I kid, I kid. But seriously, sometimes a day off from being on demand all day is really, really nice) 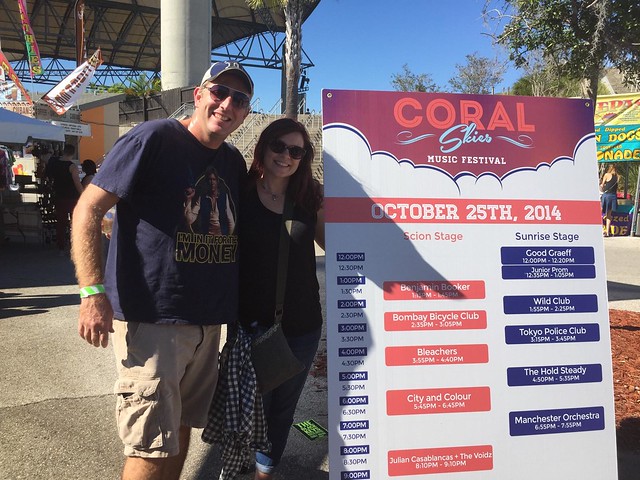 The shows started at noon. They smartly had two stages set up with 10-15 minutes between acts and the day actually ran really smoothly. It was easy getting back and forth between the stages and it was a nice mix of the main stage in the Amphitheatre and the other outside in a field.

We missed the first couple acts, including Benjamin Booker who I hope to catch another time. We arrived in the middle of the Bombay Bicycle Club’s set. 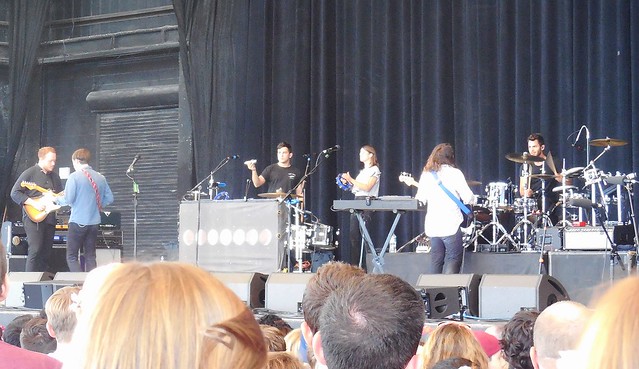 I’ve listened to them a few times but don’t know much of their music but really enjoyed their set. They’ve definitely been added to my permanent Pandora stations, now.

Plus, I need to study their lyrics to discover the meaning of the flowers. Every kid seemed to have copious amounts of flowers. Some girls had them in their hair; others, like this guy, were apparently flower dealers. 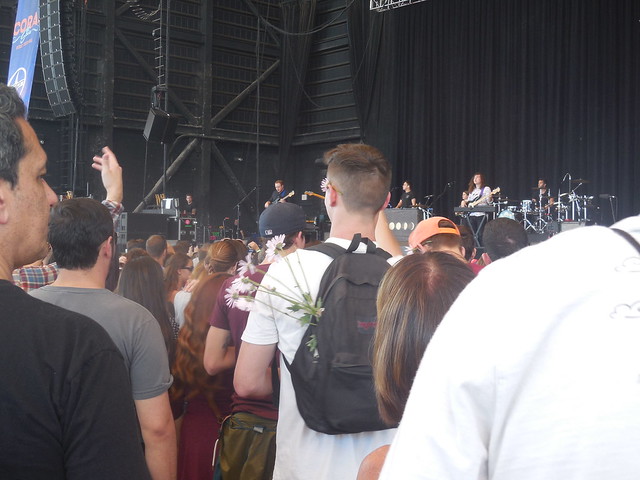 I first encountered the new Flower Generation at a Lumineers concert last year, but in that case, it made more sense given their song “Flowers In Your Hair.” So apparently flowers are a thing now. Duly noted, say the old people like us.

After Bombay, we wandered outside for another club — Tokyo Police Club. Clubs and flowers, so hot right now. So hot. Their set was pretty good, but I wanted to go fuel up for the set I was most excited about. It was nice to have options other than Miller Light. I tried a couple different kinds of ciders (also so hot right now) but that’s about all I could afford.

These bad boys were $12 each. Considering we were just about the oldest people there (more on that in a moment), I’m surprised the lines were as long as they were. How do college kids afford $12 beers?!?

Finally it was time for one of two bands I was most excited to see — the Bleachers. 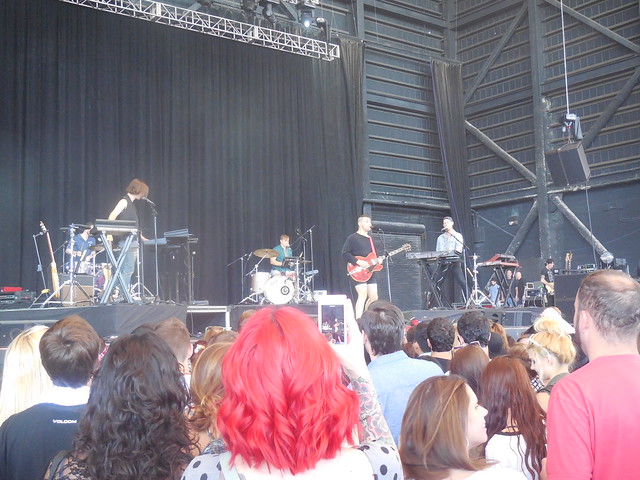 Oh my God, guys. Oh my God. They freaking ROCKED my world. New favorite band. I’m hooked. The band is led by Jack Antonoff, the lead guitarist from Fun and Mr. Lena Dunham. He also wrote Sara Bareilles’ “Brave” and wrote/produced several of the songs on Taylor Swift’s new album, 1989. So yeah, he’s kind of a big deal. And can rock some short shorts. 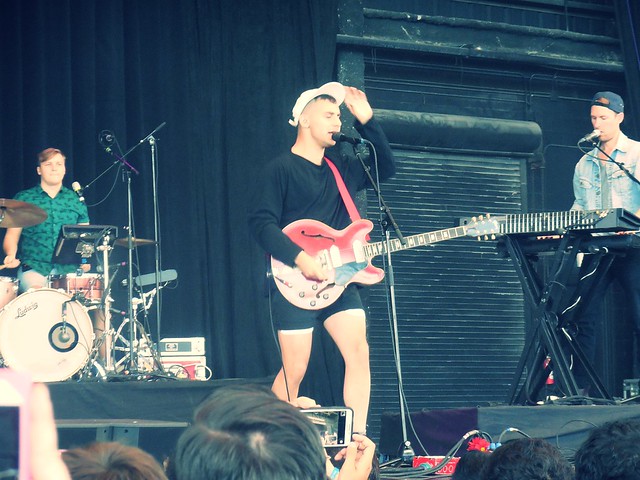 I’ve been listening to The Bleachers for a few months and loving everything. Their sound sounds familiar but I could never place my finger on it until I read an interview with Jack where he said the sound he was going after with this album is a John Hughes vibe. YES! That’s exactly what it is. When you listen to these songs, you feel like you’re hanging out in Jake Ryan’s Porsche or stuck in detention with Claire, Brian, Allison, Andrew and Bender. And it’s not like The Bleachers’ music sounds like an imitation of ’80s pop music. It’s this whole new interpretation of it and to quote my 8-year-old self, it’s totally tubular.

Not only are the songs great but Antonoff is a born frontman. He just oozes personality and all of his interactions with the crowd were sincere and personalized. He talked about this being their first-ever show in Florida but said since his grandparents are here (like all retired NYers), he’ll be back. I really hope so.

Two highlights included the Bleachers truly embracing their 80s vibe in the song “You’re Still a Mystery” with a sax solo that Rob Lowe’s “St. Elmo’s Fire” character would have been proud of. 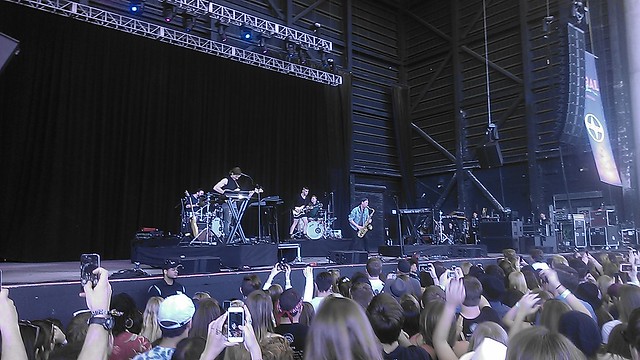 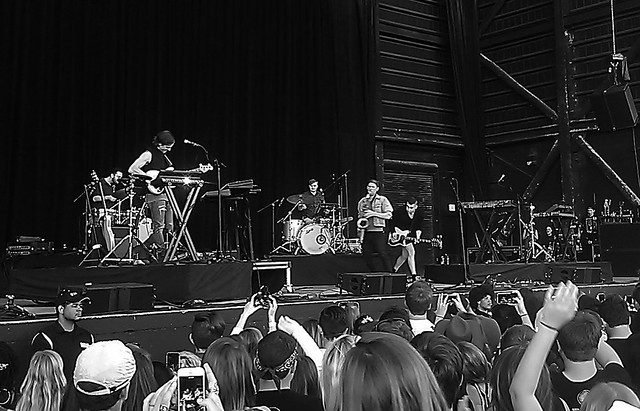 Guys, it was one of those moments that just makes you love music. I don’t care what genre you listen to, there’s nothing in the world like a great live set to get your heart pumping and to feel truly alive.

And then there are the moments that make you feel old. The Bleachers played a pretty kick-ass version of the Cranberries’ “Dreams,” which brought back all sorts of warm and fuzzy feelings about being in Ireland with my college friends the year after the Cranberries became HUGE.

After the song, Jack jokingly said to the crowd, “I’m sure a lot of you don’t even know that song. Here, let’s do a show of hands to see how old you are. Raise your hands if you were born in the ’90s!” {the majority of the crowd screams} “OK, what about the ’80s?” {a still healthy portion screams, including, inexplicably our friend Joel who I think is older than me} “What about the ’70s?!?” {to which yours truly screams loudly — it was those damn $12 beers — and then, I kid you not, about a dozen heads whipped around and looked at me, in horror. HORROR, I tell you. As I complained about it all day, my husband pointed out that it was as if I was at a concert in the ’80s and someone celebrated being born in the ’50s. Rude. I mean look how well we blended with the kids} 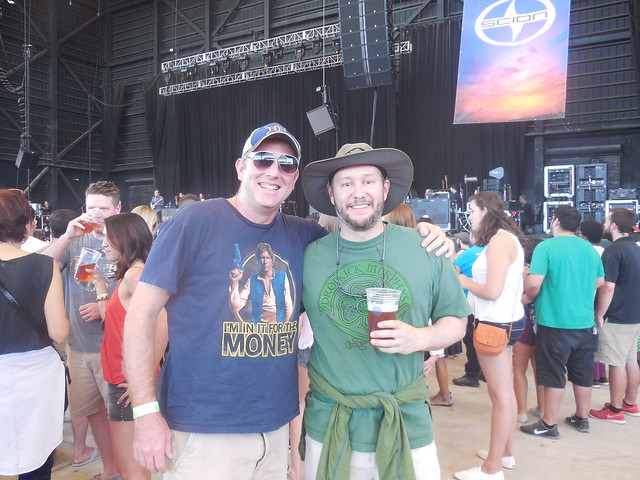 Jack, to his credit, encouraged those of us of a certain age to keep on rocking. There was a woman there in the crowd who identified herself as being in her 60s and he made everyone cheer her on and told her she was amazing. He’s good people, I tell you. I can’t wait to rock out with the Bleachers again. They’re a band I’d travel for, and that’s saying something these days. 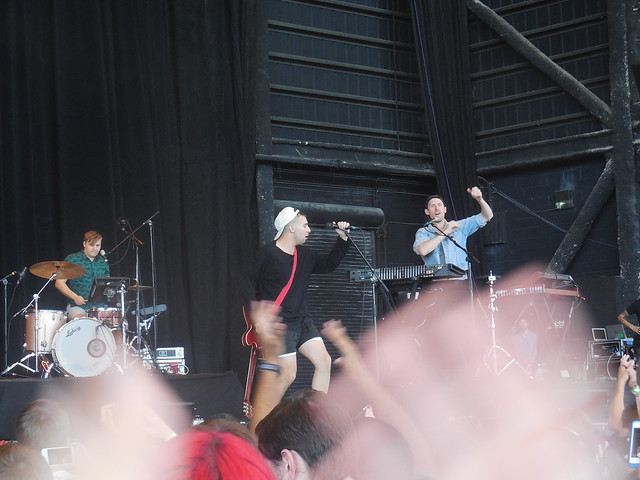 After the Bleachers’ all too short set, I was on such a music high and was psyched to head back out to the field to see the one band I’ve been dying to see for years — the Hold Steady.

For the first time in the day, things didn’t run exactly as planned. Well after the time the show was supposed to start, assorted crew members were on the stage trying to get the sound system working properly. Finally, it seemed, from the crowd at least, they gave up and just sent the band out. Things, sound-wise, were a bit spotty and the band seemed really frustrated. No matter, it was great to hear lead singer Craig Finn’s trademark grizzly voice live. I love the way that man sings … and rocks a pair of glasses. 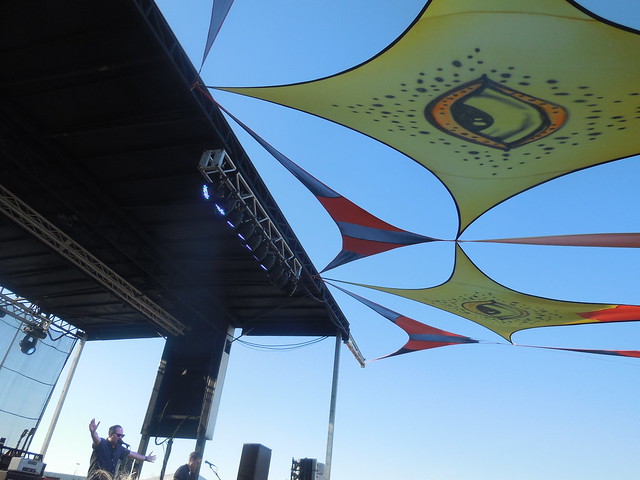 I think the on-and-off technical issues really messed with the band’s mojo. I’ve heard great things about the band’s live shows and I’m a pretty big fan of the band, but unfortunately, I wasn’t a huge fan of the set. It was kind of a bummer. Still, an uneven Hold Steady show is a lot better than NOT seeing the Hold Steady so I was still happy to be there. 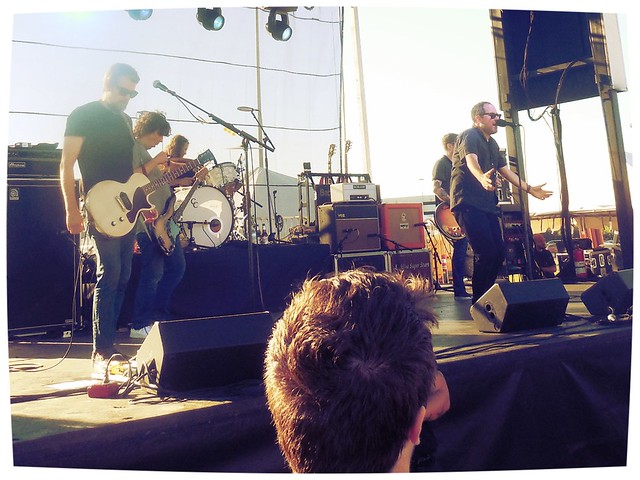 And I was pretty convinced that the guitarist was McSteamy’s twin, so that didn’t hurt.

After the set, we decided to skip the next act (City and Colour) so that we could eat. We hopped in the famous Tampa Taco Bus’s massive line because it seemed like our best best. I got two tacos, one with sweet potatoes and one with steak. 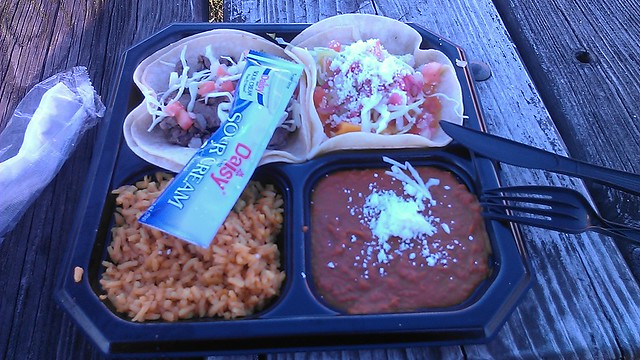 I remember liking Taco Bus the only other time I tried it, but I think that must have been PT — Pre-Texas. Ah, Texas. You and your perfect tacos and queso have officially ruined me for all other cheap imitators. Happy, now?

After our disappointing dinner, there were a couple more shows to go, including another I’d looked most forward to: Julian Casablancas+The Voidz. You probably know Julian from his former band, The Strokes, one of my favorites. I’d done enough reading to know his new act was quite different but I had no idea how different of a show it’d be. 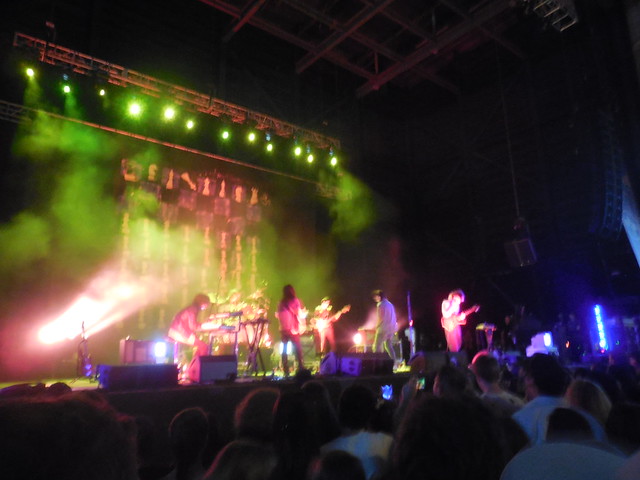 The only way to describe the set was odd. Actually roller coaster (ok, fine, two words) might work, too. Parts of it were amazing. Parts were rambling and strange. And, then, the band abruptly left the show, a good 20 minutes before they were scheduled to end (which remember, this was a very well-run and well-scheduled show). After a few minutes, the band came back and Julian mumbled something about a misunderstanding about their set length and said “they had to play more.” I’ve never seen anything like it. 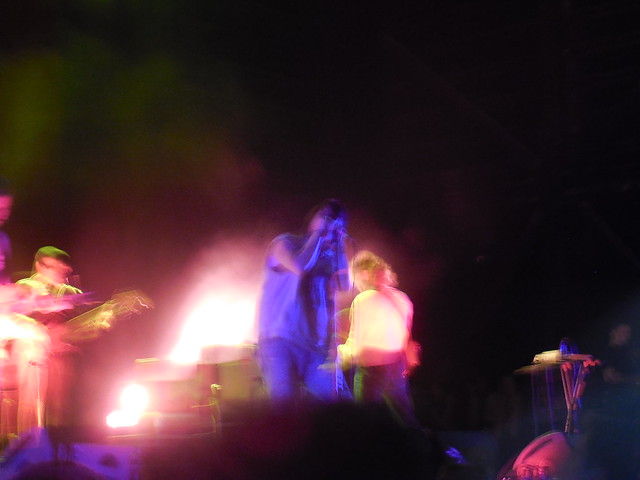 And for that final 20 minutes, the band played one song that we’re convinced they made up on the spot. There was a lot of jibberish about random things. Like chicken. I’m not joking.

The final act of the night was the big draw for most of the crowd. And Cage the Elephant did not disappoint. I admit I knew little about the band before its set but count me among its (mostly young) fans now. What a performance! 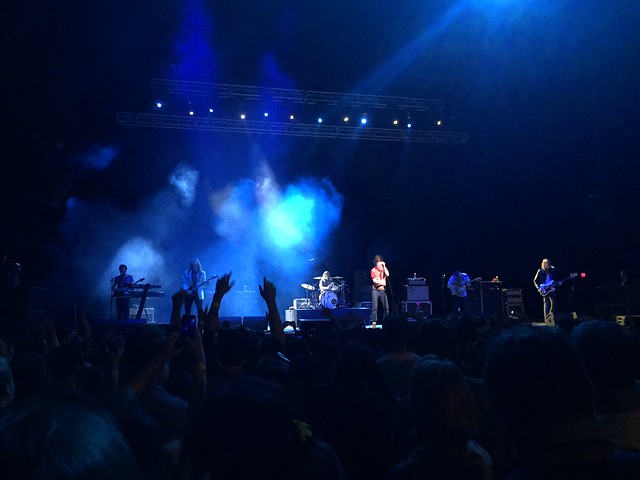 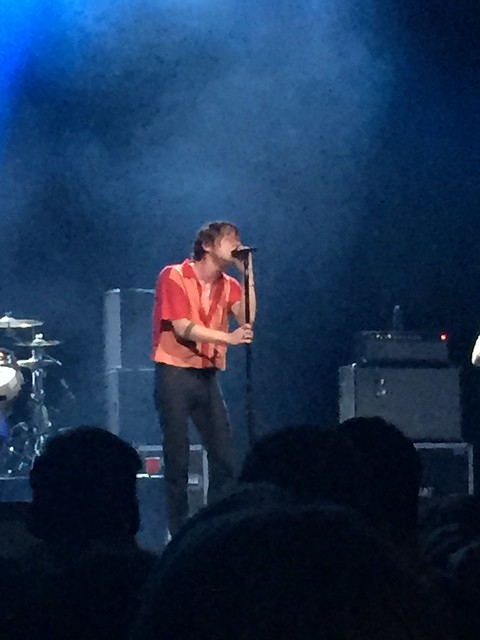 Honestly, I’m not sure if I’ve seen a lead singer with that much energy and almost manicness since I saw the Rolling Stones about a dozen years ago. 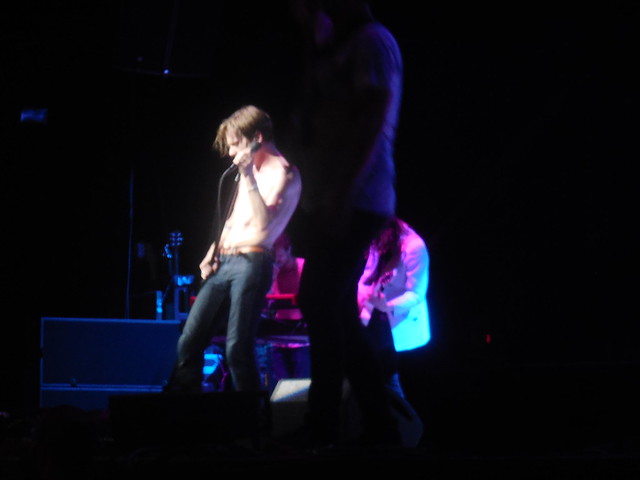 It’s a not a band I’d normally listen to a lot but I’d 100 percent see them live again.

So, that’s that. TL;DR: Coral Skies was a really, really well-organized and well-run festival. It had great bands, great beer (albeit pricey) and was just a wonderful way to spend the day. Please come back to Central Florida next year!

« Up Close With History at KSC
Christmas in Orlando »