Forgive me, blogging Father, for I have sinned. It’s been six weeks since my last post.

Don’t worry, friends, I haven’t officially quit blogging … yet. I don’t know that it’s coming (and that day may never come) but the days of feeling like I “have” to blog are gone.

Life has just been busy, stressful and yes, at times, great fun, lately. I’m not going to lie — there are days when I’m tempted to just shut the ole bloggy down, but then something happens and I want to run and rant to you all about it. So, have no fear, I’ve been storing up my rants for you. And of course, there are a few of my patented, “A long time ago, in a galaxy far away” posts waiting for you.

For now, here are a few things that have been keeping me from you:

— We went down for the count, many times over (no, not the fleas, although those pesty little bastards aren’t entirely gone, yet)

First E. was pretty sick in March with an ear and upper respiratory infection. Being the kind child she is (and frequent cough-in-Mommy’s facer), I quickly came down with it. Mine joyfully blossomed into acute bronchitis and I’m pretty sure it was pneumonia by the time it finally left my clutches weeks later. And just when I was feeling better, E did something she hasn’t done in years — a major pukefest, ALL OVER HER BED, in the middle of the night. That was fun.

Couple all of that with a painful mole removal that left me with four stitches on my ribcage for three weeks. Know what I never realized before? How many times a day the skin across your ribcage stretches. I can’t believe how much four tiny stitches bothered me, but until they came out, I was in constant discomfort.

I’ve been trying to fight through the pain though and go to Jazzercise at least four, if not five, times a week. That involves me getting up at 4:55 a.m. for 5:30 classes. That means I’m falling asleep by 10 every night. It’s a vicious cycle that keeps me from you.

— The most exciting development is that after 10 years of lusting after one, I’m finally the proud co-owner (with my husband) of a fancy new DSLR.

Thanks to some of my photography friends who helped guide us through the process, we went with a Canon Rebel T5i body and a Tamron 17-50 mm lens. It’s so freakin rad.

Since my last foray into photography was nearly 20 years ago in a freshman PHO 205 class (holla Team Golden Warriors!), I had no clue what I was doing with so many choices. And I lost my old poop sheet long ago (um, hello, why don’t I hear photographers referring to their poop sheets anymore?). So I signed up for a four-week class at Harmon Photo in Orlando. 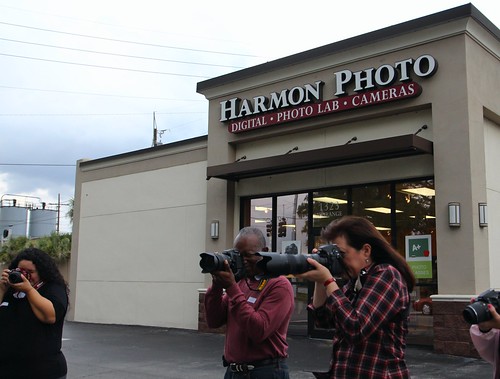 It was so great. The class met every Tuesday, from 6 to 8:30, and I learned SO much. For the most part, I’m even somewhat comfortable being in the manual settings now. Next month I plan on taking a macro class, too.

We’ve been taking the camera everywhere we can for me to practice. It’s been on a canoe down the Juniper Springs run in Ocala.

Don’t worry, my photography teacher was horrified when I told her, too. But we had it in a super-duty waterproof bag (that floats) and I only took it out on very calm stretches and for a couple minutes at a time.

Yes, seeing a gator a few feet from your fiberglass canoe counts as a calm moment. OK, fine, is this better?

Someone was getting a little tired of posing for shot after shot as I readjusted settings.

I also experimented with it at the Flower and Garden Festival at EPCOT. That was a blast.

And she (are you supposed to name your cameras? Because I’m still brainstorming over a name) came with us to the beach one day.

Why, hello there, little grains of sand.

Don’t judge the pictures too harshly. I’m still experimenting with different settings and I haven’t even bought LightRoom yet, which I know will make my pictures even better. Eventually. One step at a time.

I’m in a bit of a fast-forward mode, though, trying to get up to speed with it because we’re taking E. on her first major international trip this summer — Costa Rica!

We went there on our honeymoon 8 years ago and have been dying to take E. there to experience the country we fell in love with.

I can’t wait for her to experience the pura vida.

As for the camera, the one thing that’s still flummoxing me is organizing the pictures. Obviously each file is huge, so I don’t want them on my computer. I’ve added my first couple batches of photos to my external drive and I’m currently in the slow and painful process of adding them to Flickr. And it’s taking FOOOREEEVVVER. Any tips for managing pics? I need all the advice I can get!

— As we near our summer blackout period, we’ve also been doing to Disney almost every weekend. Somehow, we still haven’t seen the new Festival of Fantasy parade at Magic Kingdom yet and I expect we’re NEVER going to meet Anna and Elsa. But we’ve really been enjoying experimenting with our Magic Bands.

I PROMISE to do a complete post on them soon. See, it’s a good thing I’ve procrastinated doing that. They’ve already changed the system dramatically since we started using them.

But mostly we’ve just been enjoying the semi-quiet of the off-season and hanging with our Disney pals. E. even tried to convince Mickey and Minnie that #kittying is a thing.

And who needs Disney to meet Anna and Elsa. We found a place that not only had no lines but hundreds of Annas and Elsas to choose from — MegaCon 2014! And does Disney offer a Hans? I think not. 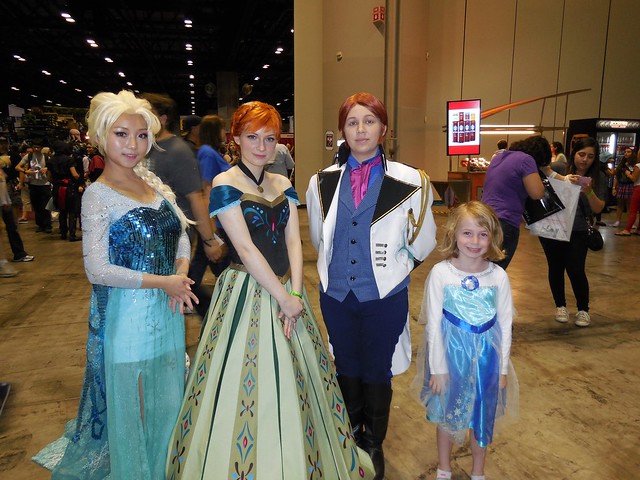 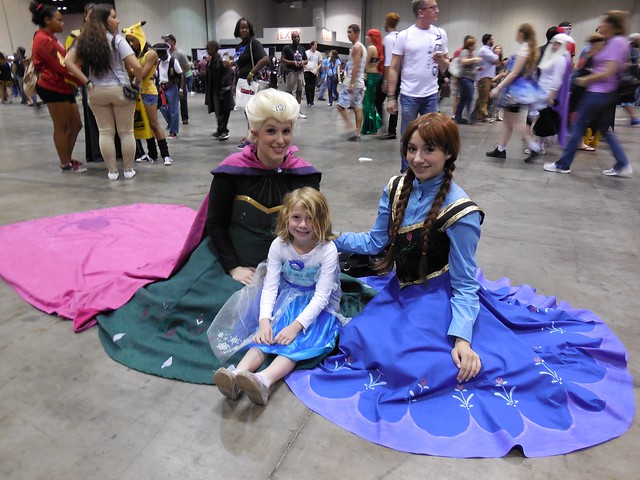 It was, um, interesting. Very fun, very geeky and very, very interesting. We also fully got our Star Wars geek on.

And then there was this gloriousness. I don’t know what he was — a Renaissance Vader? Flemenco TIE Fighter Pilot? In any event, I fully approve.

So that’s what’s been going on ’round these parts. What’s new with you?